An Aesthetic of Turbulence: The Works of Ned Kahn
by David Mather

In the early 1960s, chaos emerged as a vexing scientific issue closely related to predicting weather. Using complex math functions, meteorologist Edward Lorenz found that minuscule changes in initial inputs could radically alter the results of some experiments. Lorenz’s ‘Butterfly Effect’ describes, by way of analogy, how the flapping of butterfly wings does affect the atmosphere and could, over time, cause a tornado. This analogy for transformation and Lorenz’s experimental observations both try to convey the extreme sensitivity to input of some systems, such as climate. After 40 years, the study of chaos has become relevant to computer science, aero- and fluid dynamics and systems theory, but its special bond with weather prediction persists. The weather – long a mythic symbol of beauty, power, and even cruelty – now has an up-to-date association with chaos and complexity, due in part to the Butterfly Effect. 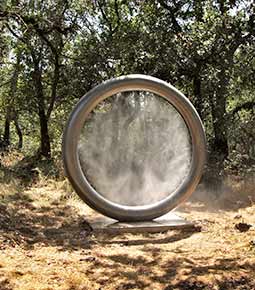 It’s no wonder, then, that Ned Kahn’s work with complex natural systems elicits mythic and contemporary associations. An artist from Northern California, Kahn replicates the forms and forces of nature. Happening across his work can be a stupefying experience, as it was for this author, since typically invisible or unobservable forces are felt as immediate, bodily experiences, as natural effects, which are only later discovered to have been artificially constructed. The planet’s complex, random and aleatory perturbations become manifested visually, tactilely and acoustically in his work. At times he re-creates environmental conditions in controlled settings, and at other times, he lets nature animate his works. Across the breadth of his work, the artist expertly choreographs natural phenomena – a skill more often attributed to gods or supernatural entities than to humans. For example, in the Babylonian Creation Myth, Marduk defeats Tiamat by forcing wind into her belly; other examples include Ehecatl, the Aztec god of wind and the Lakota Creation Myth.1 Kahn combines science, art and technology to integrate natural, human, and artificial systems, and his specific works emphasise natural elements, such as water, fire, wind and sand; how these behave independently, and how they interact.

Indeed, a key element for Kahn is wind, and many of his projects require air currents. For example, Slice of Wind (1996), at the University of Colorado at Boulder, comprises 10,000 metal discs that move freely and reflect light as the wind passes. This idea of making wind visible with movable, reflective parts operates on a larger scale in an installation in Charlotte, North Carolina. Containing 80,000 aluminium panels and measuring 6 storeys high and 260 feet wide, Wind Veil (2000) adorns the side of a parking structure. Wind streams and eddies move across the vertical sheets of metal discs, casting intricate shadows inside the building. In a project at Yerba Buena Centre for the Arts in San Francisco, air currents sculpt a dense fog that rises from a ring of stones in the courtyard. In this case, the amorphous, shifting water vapour reveals the movement of the air.

Kahn also re-creates dynamic wind currents – or turbulence, as he calls it – within controlled settings inside buildings.Tornado (1990) is a sleek, 12-foot-high structure containing a dancing airborne funnel of whirling fog. Air blowers inside the work’s upper and lower platforms create a strong updraft, while a fog generator introduces water vapour into the resulting vortical airflow. With no glass or other barriers between viewers and the vortex, the installation invites interaction with the resulting mini-twister. “If you gently run your hand through it, it will curve and recover”, Kahn explains. “But if you jump through it or wave your hands rapidly inside it, you completely disrupt the airflow, and it disappears. Sometimes it takes many minutes before the vortex can reorganise itself.”2 With elegant simplicity, Kahn’s Tornado illustrates the Butterfly Effect. 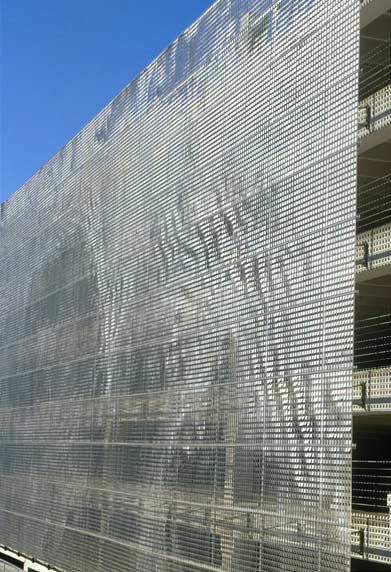 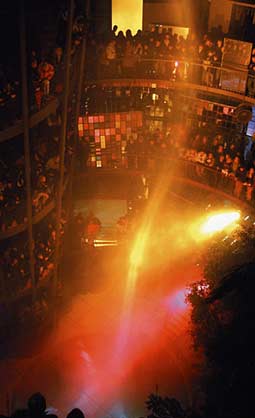 Kahn created another, much larger tornado inside a pavilion at the 2000 World’s Fair in Hanover, Germany. Collaborating with German architect Uwe Bruckner and sponsored by Duales Systems, Kahn produced a whirlwind 7 storeys high. Large turbines moved the air inside the pavilion, while an ultrasonic humidifier fed an updraft with fog. The twister resided in a tall cylindrical atrium surrounded by an observation ramp, metal scaffolding, acrylic panels and semi-translucent film.3 This project required a delicate balance among natural, human and artificial systems, and its grand scale compares to another large-scale weather project by Danish conceptual artist Olafur Eliasson.

Like Kahn’s project, Eliasson’s The Weather Project (2003) at the Tate Modern in London provoked immediate and intense responses. Eliasson simulated the setting sun inside the museum’s large Turbine Hall. The massive illusion consisted of diffuse yellow light reflecting on a mirrored ceiling.4 The realism of the installation and its iconic quality, especially in wintry London, created a sense of calming immersion. Conversely, Kahn’s giant tourbillion in Hanover conveyed a sense of awe and anxiety by confronting viewers with a turbulent natural system. By introducing weather into the exhibit spaces, Kahn and Eliasson surprised visitors in their comfortable surroundings. Also, in both projects the artists created persuasive illusions by cloaking their tools and materials; the technologies they use to create the artificial effects of unmediated nature are often hidden from sight or not apparent to the viewer.

Among the many other artists who examine natural complexities, the American light and space artist James Turrell and British environmental artist Andy Goldsworthy depend to an extraordinary degree on environmental conditions. Both artists make works about perception of nature, often requiring the artists or the viewers to visit remote geographic locations. As an example, Turrell’s 30-year project Roden Crater is located outside a small town in Northern Arizona, along a dusty, circuitous road that is far from the highway or any human activity. Also, Goldsworthy’s numerous site-specific projects involve his trekking into the distant reaches of pristine environment. In contrast to Turrell, Goldsworthy and Eliasson, however, Kahn harnesses kinetic, natural forces within formal, exhibition settings, and his works come to resemble interactive science experiments.

Two examples of such work are Kahn’s presentations of chaotic, vortical patterns using fire and water. At Technorama in Switzerland, Fire Vortex (1997) consisted of a pool of burning kerosene from which serpentine flames leap into a 20-foot-high whirlwind. Distinct from his work with water vapour, Fire Vortex presents intrinsic danger, a menacing contrast with the sinuous shape. Another work, Encircled Steam (1995), made in collaboration with Atelier Architects of Seattle, is a permanent, outdoor work that releases water every few minutes to form a vortex in a shallow, funnel-like basin. The whirlpool displays unpredictable patterns as it drains toward the centre. Both projects further demonstrate a skilful control of natural elements, specifically natural vortices, and both are supported by intricate technical systems.

Kahn’s technically sophisticated installations resemble the highly choreographed manner of an important work by collaborators Peter Fischli and David Weiss – the 16mm colour film The Way Things Go (1987). As a real-time chain reaction of experiments using gravity, chemistry, physics and pyrotechnics, The Way Things Go has been elaborately staged so that one experiment triggers another in a mind-boggling sequence that runs 30 minutes. The interaction of liquids, solids and gases produces a sequence centred on natural elements and their semi-random behaviours. The causal progression from one experiment to another is tenuous – seeming to break down, then elegantly and improbably resuming. Suspenseful despite its lack of story and characters, this film is, according to Village Voice art critic Jerry Saltz, “their masterpiece, and one of the best films ever made by artists”. The Way Things Go relates to Kahn’s oeuvre through its depiction of natural turbulence, verging on chaos, that has both scientific and poetic value. Projects that operate like science experiments illustrate both empirical and symbolic significance.

Kahn’s interactive scientific projects leave little doubt about his command of meteorological processes. Through his immense technical ability, he demonstrates the versatility of turbulent systems, such as the vortices of wind and water. He employs diverse mechanical, pneumatic and electrical technologies to design, build and refine his installations. This is how he constructs dazzlingly complex but comprehensible images of nature that respond to viewers, conform to architectural structures, and reveal environmental conditions. 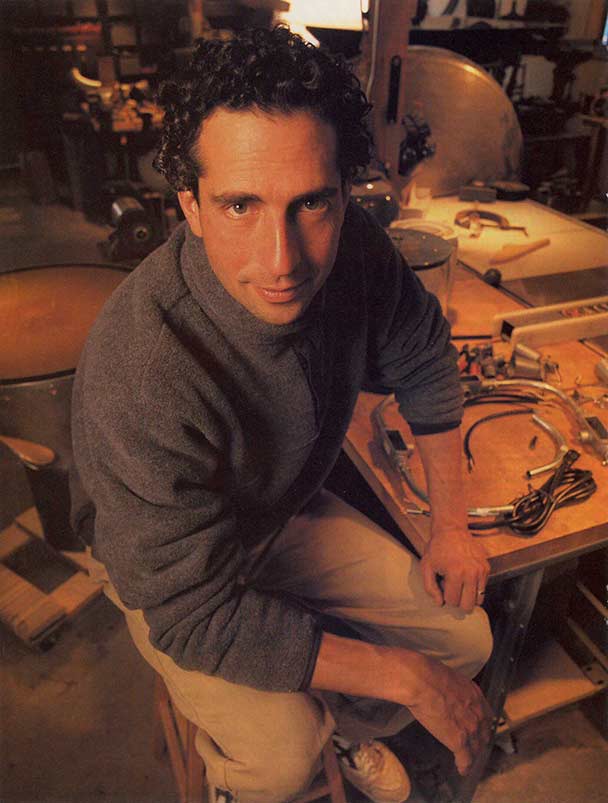 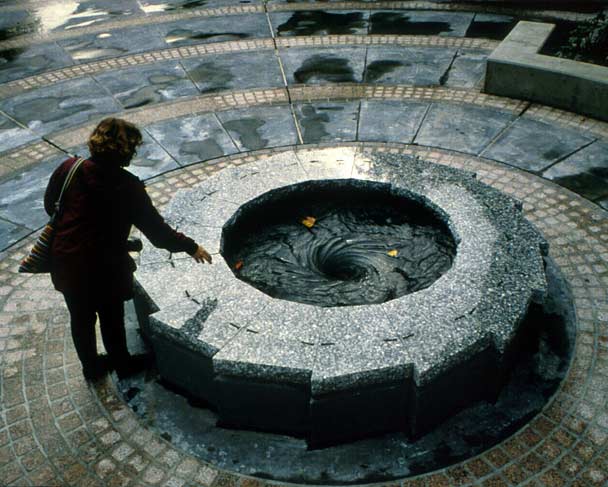 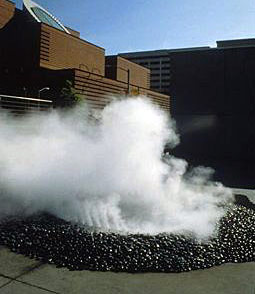 Ned Kahn presents projects both in scientific settings and in art contexts. By occupying these cultural arenas simultaneously, his work and his ideas are interpreted within separate discourses – as educational, scientific demonstrations or as aesthetic objects. Asked whether his work is more science or art, he replies, “…they’re definitely not scientific experiments, because they’re often much more uncontrolled and complicated… On the other hand, they’re not really artworks in the traditional sense… In the things that I make, even though I’ve created the physical structure, it’s really not me that’s doing the sculpting”6.

Kahn’s modesty aside, it is clear that his work straddles art and science contexts – his is a scientific aesthetic. His projects involve simulating turbulent systems, and he conducts laboratory experiments using natural elements, highly controlled conditions, and numerous technologies. Kahn’s projects can also be compared to those of a collaborative group of artists called Makrolab, which investigates meteorological concepts, among other research topics of scientific and aesthetic value.

A mobile research facility with attached residence, Makrolab invites artists and researchers for two-week to three-month visits along its established itinerary – Germany (1997), Australia (2000), Scotland (2002), Italy (2003), Southern Africa (2005), Canada (2006), Iceland (2006) and Antarctica (2007). Participants gather data and test hypotheses on a wide variety of subjects, such as weather patterns and bird migration. Slovenian artist and Makrolab founder Marko Peljhan defines the project as a “closed and isolated/insulated environment” that functions as a “communication centre and a reflective tool-machine” used to “observe the world only through mediators.”7 Working in isolated geographic places, researchers directly observe and record atmospheric, environmental, and astronomical phenomena. By eschewing symbolic representations of nature, Makrolab instead asks viewers to determine aesthetic and scientific significance for themselves – a bold framing of interdisciplinary hermeneutics. As an implicit challenge to fine art conventions, this mobile studio-lab blurs the distinction between art and science, between aesthetics and empiricism. Kahn’s work similarly blurs the categories of art and science, and his work also requires methodical, laboratory-style analysis of natural patterns. However, unlike the deliberate isolation of Makrolab, Kahn’s experiments appear in public and institutional settings.

Kahn’s works also provide insight into contemporary society. On the one hand, he has a strong commitment to making projects that respond to their environment and to individual viewers. On the other hand, he seeks out natural complexity, and he knows intimately how natural turbulence can develop in technological systems. His technologically intricate installations are premised on a desire to present natural systems to human viewers. These hybrid constructions, in effect, revise the assumed definitions of technological, natural, and social systems by showing their interdependence. As Swiss art curator Hans Ulrich Obrist says, “In our own lives, in our social environments, we see fluctuations and instability, many choices and limited predictability. Non-equilibrium physics has developed similar notions of ‘unstable systems’ and the dynamics of ‘unstable environments’.”8

Kahn brings unpredictability and turbulence into a social context, and uses scientific and aesthetic strategies to make natural complexity vivid, comprehensible, and beautiful. Art and science both encourage – if not demand – keen observation of the natural world. Artists and scientists alike use empirical methods in their research, to test hypotheses and, ultimately, to produce results. That these results often get swathed in disparate interpretations, depending on varied artistic or scientific contexts and on the perceived boundaries of institutional settings, such as an art museum, an educational science centre, or an engineering facility, does not undermine the validity of the observations. To quite the contrary, Kahn’s projects exemplify contemporary tendencies to defy institutional and disciplinary categories, to invite public participation, and to integrate scientific and artistic aims. His is an aesthetic of turbulence. 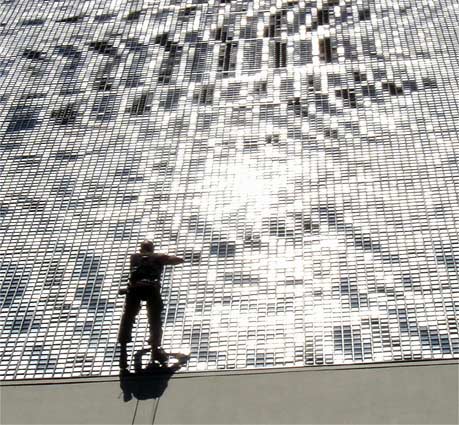 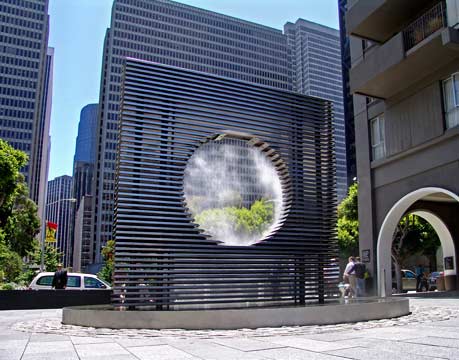 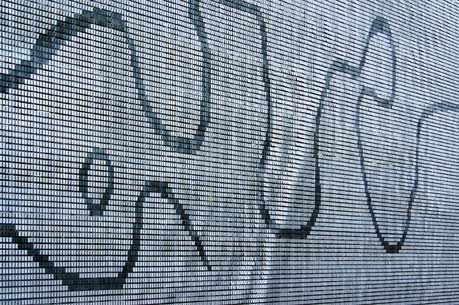